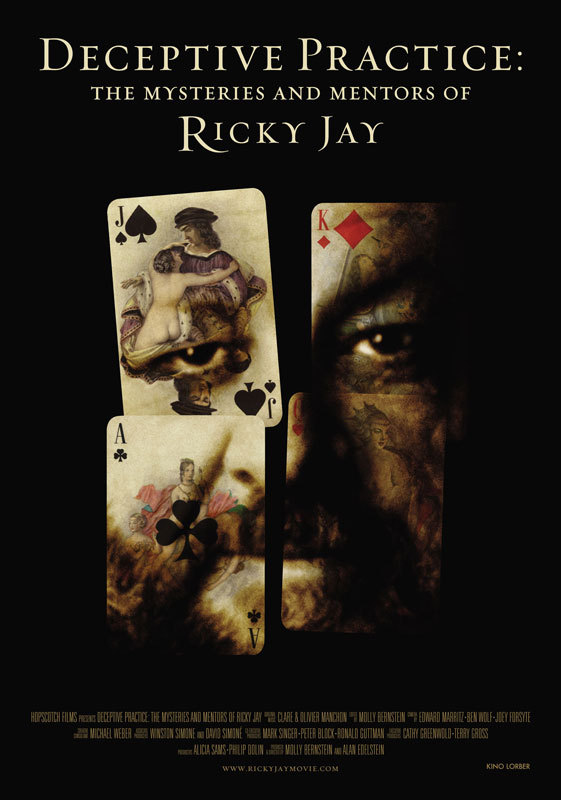 Part of this years New York Film Festival Series: On the Arts was the culmination of a 10 year plus journey for directors Molly Bernstein & Alan Edelstein in which they presented their documentary film Deceptive Practice: The Mysteries & Mentors of Ricky Jay. The film follows who many consider The Greatest Sleight of Hand Magician today Ricky Jay. He may seem familiar as Ricky is also an actor who has worked multiple times with top tier directors Paul Thomas Anderson & David Mamet in films such as The Spanish Prisoner, Boogie Nights, Magnolia and Heist. His talents and knowledge of magic also led him to be a consultant on the films The Illusionist and The Prestige.

The documentary is not a how-to on magic but rather brings you into Ricky’s world. It feels like Magic 101 in the sense that Ricky has such a vast knowledge of magic acts dating back well before the turn of the century. Ricky had no real attachments to his immediate family and the only real family he had was in his grandfather Max Katz, who was also a magician. His grandfather had connections to the magic world and that gave Ricky access to great magicians like Cardini, Slydini and Al Flosso; if you don’t know who these magicians are, don’t worry you’re not alone. That is what made this a fun doc to see because by the end you could recall these names and why they were so influential to magic.

The doc itself feels like a trick because the film is about Ricky Jay but by the end you can’t really recall that much information about the man himself. The film gives you an understanding of what shaped Ricky as a magician; through each person he met he also picked up on the techniques they mastered. If one thing is clear it is how Ricky wants this history to be passed on and not forgotten because these acts if anything were not only influential but also phenomenal to watch. Magic as he refers to it is very much like martial arts in the sense of having a sensei and learning through them. It takes a lifetime to fully grasp all the nuances that go into the act and you can tell by the way Ricky explains everything that he is very respectful and in love with magic.

The film showcases Ricky’s rise in magic from his earliest performances at age 7, his appearances on the Dinah Shore show and his immensely popular Broadway shows. Any fan of magic or anyone curious in its history should check this out as I found it very entertaining and by the end of it you’ll be YouTubing Ricky Jay and a lot of other magic acts.