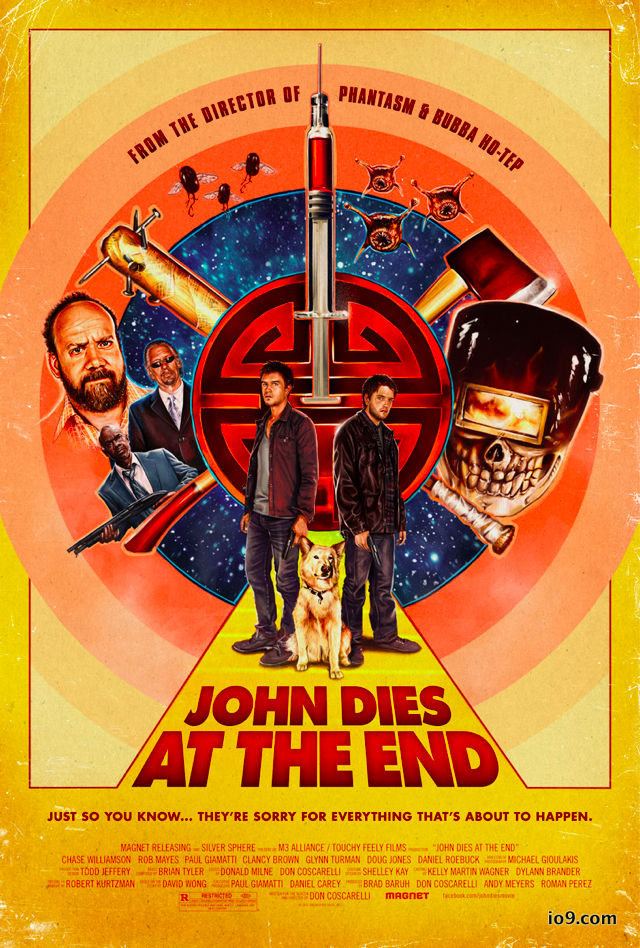 With a resume of films such as Phantasm I – IV and Bubba Ho-Tep writer/director Don Coscarelli is a perfect match for a film adaptation of David Wong’s horror/comedy novel John Dies At The End. I’ll start off by saying I have not read the novel itself so this review is solely based on the film. However, I did research into the novel and just from a brief glance it seems like a pretty trippy, off the beaten track type of story. If anyone has seen Coscarelli’s previous film Bubba Ho-Tep starring Bruce Campbell you would know the pairing seems just right; for those who haven’t seen the film it’s about two old men in a retirement home who think they’re Elvis Presley and JFK who fight an ancient Egyptian Mummy…. so yea think about that one for a second.

The film centers on Dave and John played by newcomer Chase Williamson and Rob Mayes. They are two friends living in a random mid-western town with not much to do; that is if you find being “spiritual exorcists” boring. We’re introduced to Dave who is the main focus of the film and within the first two minutes you know what you’ll be in for: Dave savagely decapitating a zombie Nazi, then going over the process of having the proper utensils and having to revisit the hardware store for replacement tools…nothing out of the ordinary continuously replacing an axe head. Dave narrates most of the film as he is talking to Arnie played by Paul Giamatti who is interested in bringing his story public.

The film focuses on how Dave & John got into this line of work along with a glimpse of other cases. It all starts with a drug called “the soy sauce” that John injected on purpose and Dave accidently. Unless the drug finds you worthy it will kill you. Luckily both were spared, somewhat, but its affects doesn’t leave much to be happy about. The drug allows its users to access the full capabilities of their brain and gives them amazing insight into the past, present and future. It also allows them to transport to alternate universes and see demonic creatures that exist in our own world. In other words – This is one FUCKED UP drug.

The film is a horror/comedy but unlike Shaun of the Dead or Zombieland the laughs aren’t right out in the open, presented like a gift.  They’re subtle, weird, and mostly consisting of sarcastic comments. I felt as if I was watching an old Sam Raimi film like Evil Dead 2 or Army of Darkness that had those weird monsters and moments where it was so out there you had to laugh at it. What else can you do but laugh when frozen meats join together to form a monster or someone is fighting a flying moustache? Williamson does a good job as Dave and carries the film well with his Ferris Bueller-esqe delivery. Mayes is great as the dumb and wild friend, I can’t call him a sidekick because I didn’t feel as either character was a leader; they support each other and they are just friends taking care of business.

Coscarelli doesn’t present a linear story; he jumps around here and there. It offers a broader view of both characters and what they deal with. This isn’t just one story, it’s their lives and you definitely get a sense of that. The ending could set up a sequel if Coscarelli ever wanted to revisit that territory and I hope he does because I’d like to see where else he can take these characters. It seemed he was just giving us the tip of the iceberg with the story and its characters such as Dr. Albert Marconi played by Clancy Brown (The Shawnshank Redemption, Starship Troopers). Marconi is their alley/confidant/boss who is also a big time Religious TV Personality. The film was a fun, weird and welcomed de-tour from the Hollywood norm.

Purchase John Dies at the End on Blu-Ray