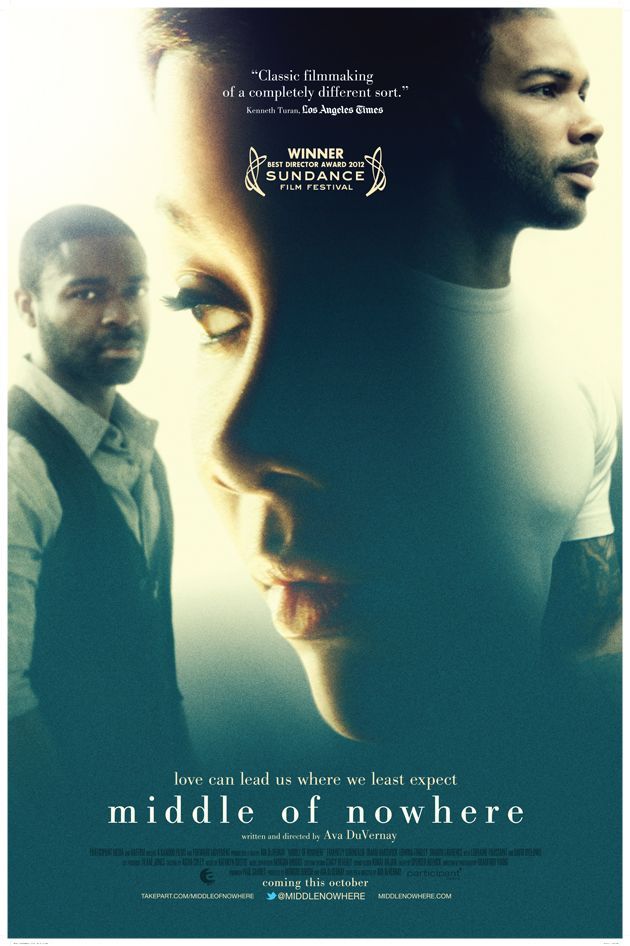 There are certain situations in life that there is very little preparation for. One such event would be the sudden incarceration of your spouse on gun charges and them being sentenced to 8 years in prison with the possibility of parole in 4 years with good behavior. Although that might be an extreme, it is certainly the case for Ruby in Ava DuVernay’s second feature film Middle of Nowhere.

Emayatzy Corinealdi plays Ruby whose husband Derek played by Omari Hardwick (Sparkle) has been arrested and sentenced on gun charges. At the start of the film we watch the first visit between Ruby and Derek since he has been incarcerated. Derek knows what he is in for, he pleads with Ruby to just leave and not come back. Ruby is deeply devoted to her husband and she has no doubts that he will be let go on parole; even if that means giving up on medical school and taking 2 hour round trip rides to & from the prison for visitation. On top of this Ruby also decides to become an advocate for Derek and tries to help him in any way she can to have an earlier release. Corinealdi has a childlike innocence to her that makes the viewer feel empathetic towards her; in some ways it feels as if she hasn’t truly grown up yet. She still has faith in Derek when not even her sister, mother or Derek himself has any left.

Ruby has sacrificed over 4 years of her life for Derek. She dreams constantly of the times they spent together and all she can think of is having him back. Her sister and mother try to make Ruby realize she is wasting her life; after a while you start to see what they mean. Ruby’s whole life revolves around Derek, other than taking time out to eat, work & sleep Ruby does nothing for herself. It isn’t until she meets a city bus driver Brian played by David Oyelowo, that she begins to experience what life can be. She stands by her morals when Brian asks her out but after a revealing secret during Derek’s parole hearing, Ruby does not hesitate to act.

Ruby is unable to move forward because of her past but I believe there is a deeper meaning. It seems that Ruby has never been able to live her own life. After a very emotional scene with Ruby’s mother Ruth played by Lorraine Toussaint (Saving Grace), Ruth angrily asks her daughter “What are you thinking?!? Say something!!” Toussaint does an excellent job portraying a mother who has let her daughters down. She takes the misery that her daughters are living through as her own punishment for being a neglectful mother; she will not let that happen anymore, to her daughters or her grandson. It is right after this scene that Ruby unleashes all the pain and grief she has been holding inside of her.

Fairy tales are not reality and Ruby realizes this the hard way. DuVernay portrays this film as the harshest reality with each character trying to almost fool themselves into thinking things are or can be better than they are. At times the film moves at a slow pace but I believe DuVernay is trying to bring some reality into the film. The choices Ruby make aren’t quick and without thought, in fact even after she thinks she is over Derek there is still a small piece that clings on to that former life & love. DuVernay did a great job shooting the film and it’s understandable why she won Best Director at the 2012 Sundance Film Festival, she also became the first African American woman to win the award. Ruby’s journey is not an easy one but by the end of the film it was satisfying to know that at least in someway she had grown up and begun to see the possibilities ahead.

Purchase Middle of Nowhere on DVD