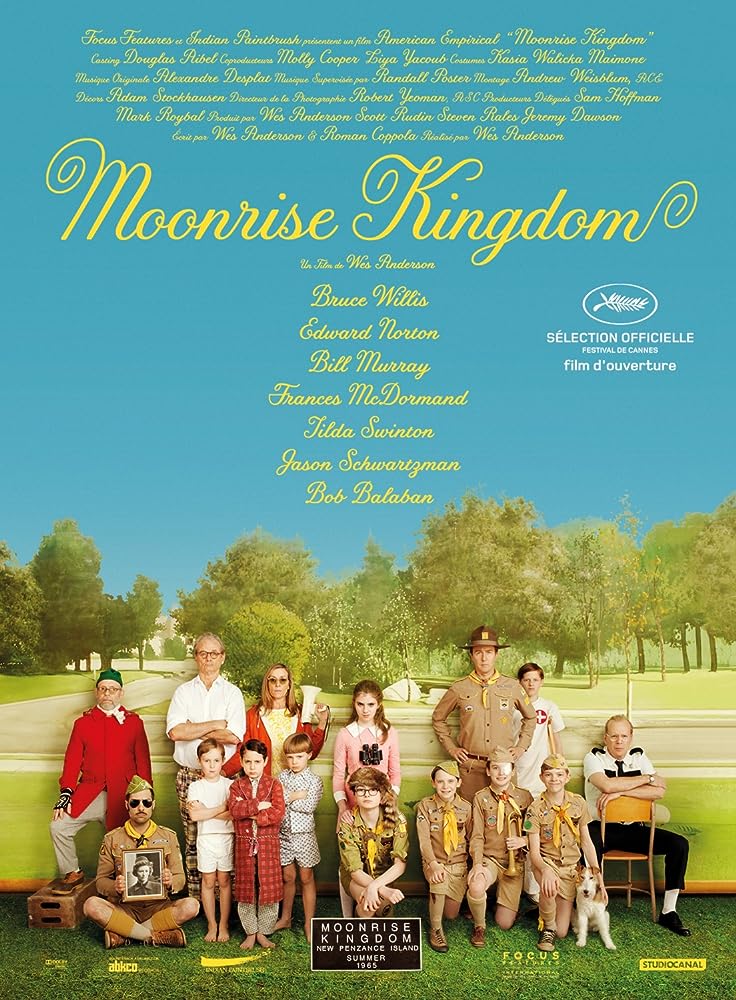 Set in the small coastal town, New Penzance off of New England in the summer of 1965, we are brought into a love story… starring twelve year olds. The newest film from director Wes Anderson (Rushmore, The Darjeeling Limited, Fantastic Mr. Fox) centers around the relationship between a seasoned Khaki Scout Sam Shakusky and a curious sleuth Suzy Bishop played by new comers Jared Gilman and Kara Hayward. If you have seen Anderson’s previous films you can recognize right away by the look, tone, editing and all around story telling that this is, his film. What I found refreshing and hopefully can float over to a wider audience is how seamlessly the story flowed; whereas I found his previous films had a stop and go feel to absorb the characters or other aspects of the story, which I do not mind but may throw off other viewers. The film still contains that quirky family element with Suzy’s parents as Frances McDormand (Fargo, Burn After Reading) and Wes Anderson Alum Bill Murray play Laura & Walt Bishop. We still have a Wes Anderson film just with tighter storytelling and new dynamics.

The back story of Sam and Suzy’s relationship is an odd one, which is nothing surprising. Sam is with his Khaki Scout Troop attending a play when he gets bored and decides to sneak backstage. He asks a group of girls what kind of birds they are for the play, when one starts to respond Sam cuts her off and asks the question again but this time pointing specifically to Suzy. It is from that point on we learn how the two fell in love through a montage. Their relationship, as random as it is, isn’t so much out of love but more out of wanting a different/better life. Suzy is the only girl out of four children, her father is oblivious to everything, her mother communicates with everyone by speaking through a megaphone and she is also having an affair with the local sheriff Captain Sharp played by Bruce Willis. Sam is a orphan whose foster family does not care for or about him, he is sent away to camp and when he is outcasted, decides to run away and meet Suzy.

The film for the most part centers on Sam and Suzy making their way through the woods while hiding their tracks from Suzy’s parents, Captain Sharp, Khaki Scout Master Ward played by Edward Norton and his band of little renegade Khaki Scouts. This is an A-List of stars and rounded out with Tilda Swinton (The Chronicles of Narnia, Michael Clayton) as Social Services and another Anderson Alum Jason Schwartzman as Cousin Ben, Jared and Kara still hold up their own and I might say outshine the rest of the cast. The additions of Edward Norton and Bruce Willis were great as I thought both were hilarious in their roles. Norton as an over the top serious Scout Leader who claims his first job is being a Scout Leader…second, a math teacher. Willis turns a complete 180 as a lonely, nerdy sheriff with hiked up pants who lives in a boat house.

In an age of instant messaging you can really appreciate and adore the relationship that Sam and Suzy share. It was that care free innocence that kept the film going and alongside the ridiculous humor and interactions between the adults searching for these two “lost” children, that is what made me really enjoy this film. Some may think Wes Anderson rehashes the same type of story or film but I believe he is just a unique filmmaker with his own take on the world, just like everyone else from Martin Scorsese, Quentin Tarantino, or Francis Ford Coppola. I feel this film shows him growing more in the sense of a storyteller while still being able to incorporate his own brand of humor and character depiction that we have come to love from his previous works.