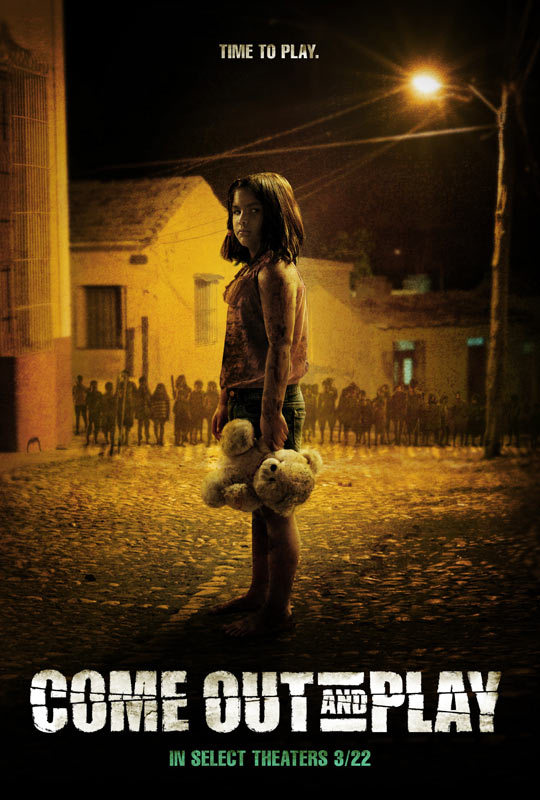 I’ll admit it… children in horror movies creep me the hell out; everything from Pet Cemetery, Children of the Corn, Poltergeist and even those damn girls singing the Freddy Krueger song. I love horror films but that’s one element that can still send a shiver up my spine. With that being said I took my big pussy cat self to check out first time writer/director Makinov’s film Come Out and Play. The film is based on the novel El juego de los niños by Juan José Plans and a remake of the 1976 film Who Can Kill a Child? which was written/directed by Narciso Ibáñez Serrador.

Francis and his seven month pregnant wife Beth, played by Ebon Moss-Bachrach and Vinessa Shaw (Vegas, Side Effects), are enjoying a relaxing vacation somewhere in South America when they decide to visit an island off the coast. As the title sequence begins your senses kick in that something bad is going to happen; from the bold red font used, the ominous score, and the slow zoom out of the young couple that reveals nothing but a crystal blue ocean. Upon arriving it does not take long for them to realize that something is askew. After some investigating they find themselves stranded on the island with its only inhabitants… the children. While gathering supplies for his wife Francis witnesses adults being brutally murdered by children as they giggle and laugh. It turns out that the night before “something” came over all the children where they all woke up at the same time giggling then began killing off every last adult.

While watching the film it felt as if I was watching an old horror film from the 70’s; from its pacing to the soundtrack. It was not until after that I found out this was a remake. I watched the trailer for the 1976 version and one thing came to mind… both versions look exactly the same. Through some reading it turns out that Makinov did not stray that far off from Serrador’s version; some say it’s almost a carbon copy. With that said I’ll admit I have not seen the original and this review is solely based on the remake.

What stood out the most for me in the film was the soundtrack. The film really only involves Francis and Beth but the soundtrack acts as a supporting character. It is a vital part of the film and without it the film would not be the same. It gives the scenes a certain atmosphere and can either put you at ease or have your pulse racing. The locations are really beautiful and the shooting style Makinov incorporated really allows the viewer to feel a part of it. The pacing of the film too I felt allowed viewers to feel more involved; as everything unfolds you and the characters are asking the same questions and experiencing the same anxieties.

Bachrach and Shaw really delivered in their performances. Bachrach was great and I felt his uneasiness, uncertainness throughout the film while Shaw’s innocence was a strong contrast to everything going on around her. Their inability to do harm to these children gives you a sense of their character. Throughout the course of the film they’re both pushed to their limits and when you reach the end it is clear to see how they got to where they are both emotionally and mentally. It’s a trip that the viewer takes along with them and by the film’s climax you feel, at least I did, vindicated. Although I saw the “twist” at the very end coming is was still somewhat pleasing to see something different in a horror film opposed to “well everything here has been fixed.”

I enjoyed this film on its own but as I mentioned not too many have the same feeling. I believe that even if you copy something that doesn’t mean it’s going to be good; a prime example would be Gus Van Sant’s remake of Hitchcock’s Psycho… in my opinion a complete waste of time, both in viewing and in making it. With that said I can only hope that Makinov has something original in store for his next outing because he does have the talent, it seems, to entertain us movie folk.

Purchase Come Out and Play on Blu-Ray