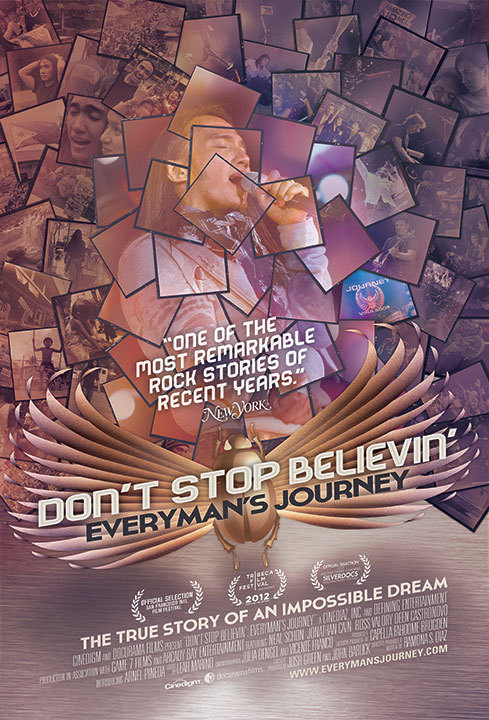 If you’re a music fan then it’s more than likely you’ve hummed or sang along with Journey. Since the early 1970’s they’ve been entertaining thousands of fans with their pop rock anthems from Wheel in the Sky, Any Way You Want It, Open Arms and of course Don’t Stop Believin’. When singer/song writer/front man Steve Perry left the group in 1987 the band went on hiatus. The group performed with Steve once more in the mid 90’s but was fully replaced by 1998. In 2007 after a revolving door of lead singers lead guitarist Neal Schon found the answer he was looking for in the Philippines through YouTube and his name was Arnel Pineda.

This documentary follows the band from when they just found Arnel and his journey forward, no pun intended. If you’re in the mood for a feel good flick then this is the one for you. From beginning to end Arnel repeats how everything is just a fairy tale and he cannot believe this is happening. The film takes you through the grooming process Arnel went through in preparations for his first performance; which was held in Chile in front of 18,000 people. From there the film becomes a bit repetitive as the band along with Arnel tour the country; what follows is a montage of moments with the band jamming before a show, highlights of Arnel’s performances and road trip moments. One thing is very clear throughout Arnel is the #1 priority. The band realizes how vital he is and takes precautions so Arnel won’t blow out his voice like former singer Steve Augeri.

Throughout the film we also get a brief history of Journey from their formation to subsequent problems with Steve Perry. It’s a cool little bit that gives you a sense of where the band was both mentally and emotionally though the years. We are also given Arnel’s back story and the hardships he had to overcome; death of his mother, poverty, drug & alcohol addiction. That is what makes it such an inspirational & feel good film as you can’t feel anything but joy for Arnel who is living his dream; and who doesn’t want that.

I would have preferred to see some of the hardships Arnel faced when going on tour for the first time or dealing with other band mates. Journey along with Arnel have also released two new albums, the work that went into those albums and the collaboration effort was also something not touched upon. In the end Journey has gained a whole new fan base with Arnel as their front man and is still selling out tours. With such an inspirational story and kick ass soundtrack this film was fun to watch.