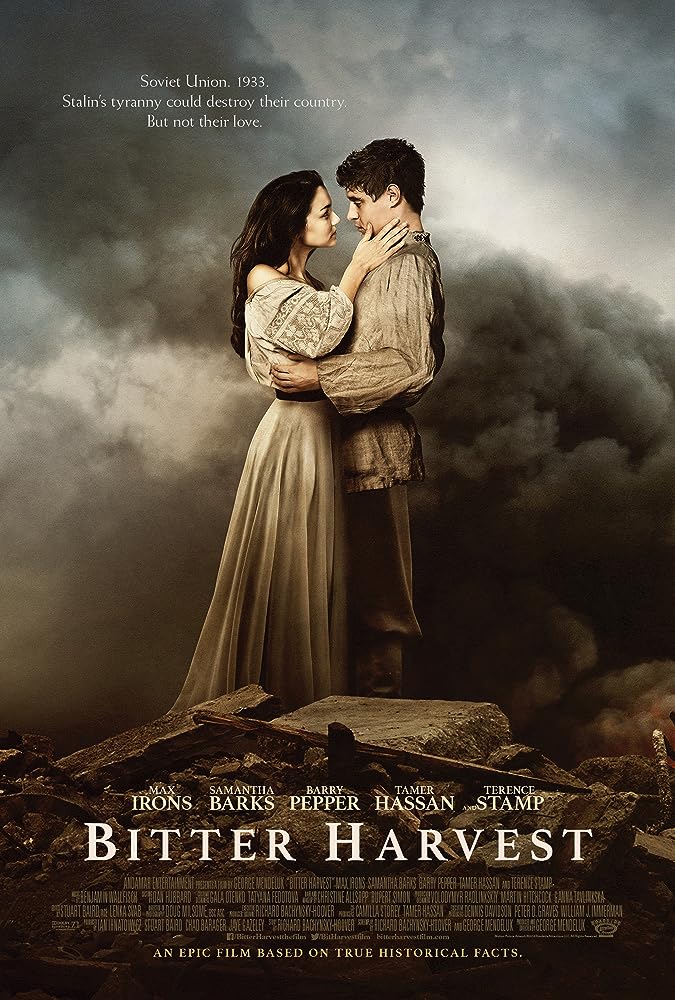 There are many horrors our world has faced throughout its existence. The worst acts are those created by someone who have little to no care whatsoever for their fellow human being. Most would consider the Holocaust the greatest crime committed against a race of people but there was a common horror when similar events occurred but were neither known or heard of. This would be the case during the early 1930’s in Ukraine when an unimaginable famine, later named the Holodomor, took place at the hands of the Soviet Union and Joseph Stalin. Due to strict control over what came in and out of the county Stalin controlled the news of the horrific events. Their actions were unknown until 1993 when the Soviet Union disbanded and the casualties estimated to range from seven to ten million.

This is the backdrop to director George Mendeluk’s Bitter Harvest. It follows the life of a young Ukrainian boy Yuri, played by Max Irons, who lives in a village with his parents, his father played by Barry Pepper, and his grandfather played by Terence Stamp. Yuri dreams of a life outside his small village and moving to Kiev to explore life as an artist. The opening shots of Yuri’s village and surroundings are beautifully shot, resembling paintings full of vibrant colors. The beginning of the film feels like a fairy tale and not like something based on true events. I do not know if this was a choice of the director but in contrast to the rest of the film, it offers a very stark contrast, compared to later scenes that are dreary, dark, cold and with no life.

Watching the film, I could not help but compare issues to our own government now. Yuri dreams of moving to Kiev to be an artist but when he arrives, he finds that the situation there is not very different from his small village. The state has claimed all possessions as their own and those who do not sign are enemies of the state. The scenes with Stalin are interesting as every time he makes a decision concerning Ukraine it is a stark contrast compared to what is happening there: from sipping tea with a table of military personnel, to walking down an elaborate spiraling staircase and his last order made during an elegant party. Stalin’s decision do not impact him, other than slowing progress, but rather it seems an inconvenience to him as he is eager to deplete Ukraine of all its resources. The key to the Soviet’s power lies in their ability to share the information THEY see fit and to keep anything else out of the public eye.

I really enjoyed Irons’ performance as Yuri. He takes the character on a very emotional journey that forges him from a young, naïve painter to a strong willed, courageous warrior. Barry Pepper and Terrence Stamp deliver solid performances, even for the lack of screen time they each have. The chemistry between Irons and Samantha Barks, who plays his love interest Natalka, is very evident. It makes for both their separate journeys even more staggering and their reconnection all that more powerful. As the viewer, we have been following these two young lovers through their most difficult ordeal and unfortunately, we get no pay off. Although the film is based on true events, the story of Yuri and Natalka is pure fiction with the events serving as the backdrop.

If there were a complaint about this film, it would be how certain plot points were looked over or just not given a proper pay off. The villain Sergei, played by Tamer Hassan, was superb in his role as a ruthless Soviet captain however, I feel his ending was cut short and should have been given a bigger final confrontation. The same could be said about actor Richard Brake who is a great character actor yet, I feel his role was so minor that it was a waste of his talents. I must reinforce though that the performances from Irons and Barks along with the beautiful cinematography make this an enjoyable film to watch, albeit the ambiguous ending.