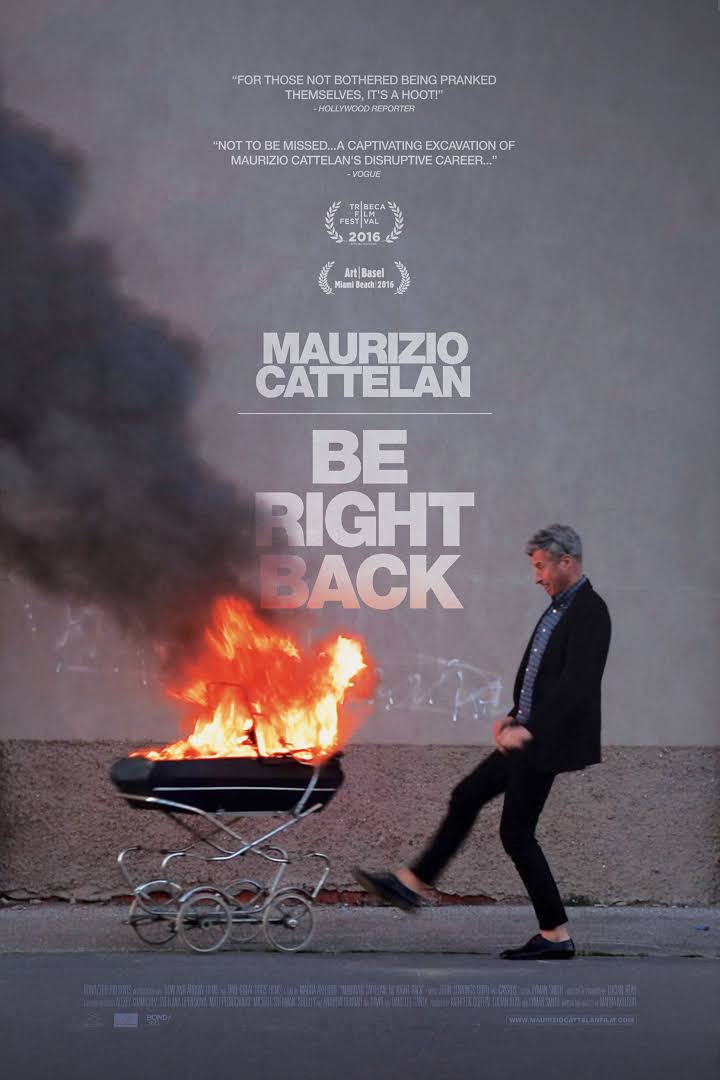 Most people who hear the word art would likely associate it with museums, galleries, sculptures and paintings. There is of course a multitude of layers when it comes to art and what people perceive art to be. I would be the first to say that I have seen things considered art and not completely understood it; I may have even called it stupid. That does not make my opinion right or wrong it simply was my opinion and how I saw the piece of work. One could also say that my reaction to said piece was in itself the art as it made me feel something that was not there before.

If I were to mention the name Maurizio Cattelan, most and I included would not know whom that is; this was the fun part when watching Mauro Axelrod’s documentary Maurizio Cattelan: Be Right Back. I had never heard of this artist and to learn about him, his philosophy and see his works for the first time was truly a pleasure. Axelrod provides a straightforward narrative about Cattelan giving the viewer insight to his madness including interviews from art colleagues, past & present girlfriends and his sister.

If you were just to see one of Cattelan’s pieces such as Daddy Daddy, a Pinocchio puppet face down in a pool of water or Him, from behind looks like a child on his knees but when he get close enough it is Adolf Hitler, they may not make much or any sense at all. Watching this film, you would understand from Cattelan’s sister that their father’s favorite story was Pinocchio, which could stand as a metaphor for Maurizio’s relationship with his father. Him is a thought provoking piece where the viewer is unaware of who is on their knees until they get close enough and when they do, they are startled: one because it’s Hitler and second what is Hitler doing, is he atoning for his atrocities or something else.

If one thing clearly comes across is Cattelan’s humorous, childlike amusement in riling people up. “Meaning cannot be imposed it has to be discovered” is a quote given referring to an untitled piece that has three life-size children dolls hanging from a tree. Whether it is “art” or not is not the question rather the feelings that one has about the piece is what Cattelan takes pride in. Feelings so strong that someone felt the need to climb the tree and cut the children loose.

I compare Cattelan’s antics to that of Andy Kaufman when he played Tony Clifton. Both seek to rile up the crowd and do whatever amuses them to get a reaction from the crowd; in turn the reaction of the crowd is what amuses them be it laughter, anger or bewilderment. By watching this documentary not only will you get a glimpse of Cattelan’s wacky sense of humor but also an insight into what he is trying to achieve through his art, whether you care for it or not because in the end “the manipulator” has won and you don’t even know it.