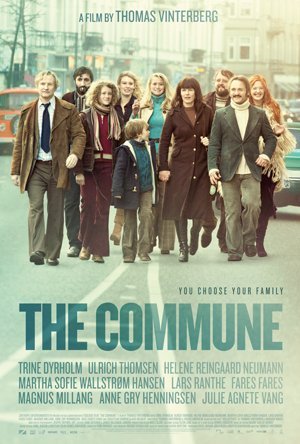 Films allow us to escape from our real world issues. They fall into the category of art, as they should, which opens it into a completely new world of endless possibilities. Filmmakers have their own voice and when executed correctly can tell a story about anything in any matter they please regardless of the topic. We have been led to believe that every film should follow the same structure of beginning, middle and end. The truth is though a filmmaker can do with their film whatever they please: it does not need a likeable character, nor does it always warrant a happy ending and at times does not even need to make sense.

I always found films that capture a “slice of life” interesting because although you are watching a film the story told does not have to encompass everything. As the viewer, we only view this singular moment in time that encapsulates just a portion of the character’s lives. This is exactly what director Thomas Vinterberg brings to us in his film The Commune. Set in 1970’s Denmark a family moves into a large house they later fill with friends and like-minded individuals to build a commune. Through the partnership, they rely on each other for support and stimulation as together they are stronger than if standing alone. The idea was initiated by one of the main characters Anna played by Trine Dyrholm who feels this change can not only help herself but also her husband Erik played by Ulrich Thomsen (The Black List, Banshee) and their daughter Freja. The new environment was intended to spark creativity as well as introduce a new dynamic that could help stimulate growth and reluctantly Erik agrees.

What unfolds is what happens in all our lives, there are ups and downs. Within life certain events unfold that thrust us into situations we never imagined could happen. How we handle said issues and events is vitally important as it defines who we are as a person. Vinterberg is able to capture these vital moments and portray them as natural progressions of these characters. How these people got from point A to B is not the answer but rather the journey in between. The strength in Vinterberg’s story telling as well as the actor’s performances are that we can make our own assumptions about these character’s lives; building the stories that are not present in the film before or after the events occur.

I do not think this film would be as good if not for the performances from Trine Dyrholm and Ulrich Thomsen. The journey both Anna and Erik take are deeply emotional, convoluted and brutal. As strong as they are together in their scenes as husband and wife it is Trine’s performance that still resides in my head. The sheer emotion that spills off the screen from Trine is heartbreaking and triumphant at the same time. As an actor I could not imagine pouring so much into a role because just watching the film it holds nothing back. It is a testament to not only Trine’s but the entire cast’s performance. It feels so natural and free flowing it is as if you could be watching a documentary.

I have seen films where the ending comes off as bland or unsatisfying and this could have been the case for The Commune too but it feels just right. Of course there is more to the story that could be told but just in where the film ends as I said earlier it is a slice of life. Where it ends allows us to think of the next chapter just as we had been thinking of where these characters had started from. I would say this film has all “the feels” but more importantly it is a well-made film with a director gifted in storytelling that was also blessed with a crew of extremely talented actors.

Film releases in NYC on Friday May 19th at:

Film will also be available via On Demand, Amazon Video & i Tunes