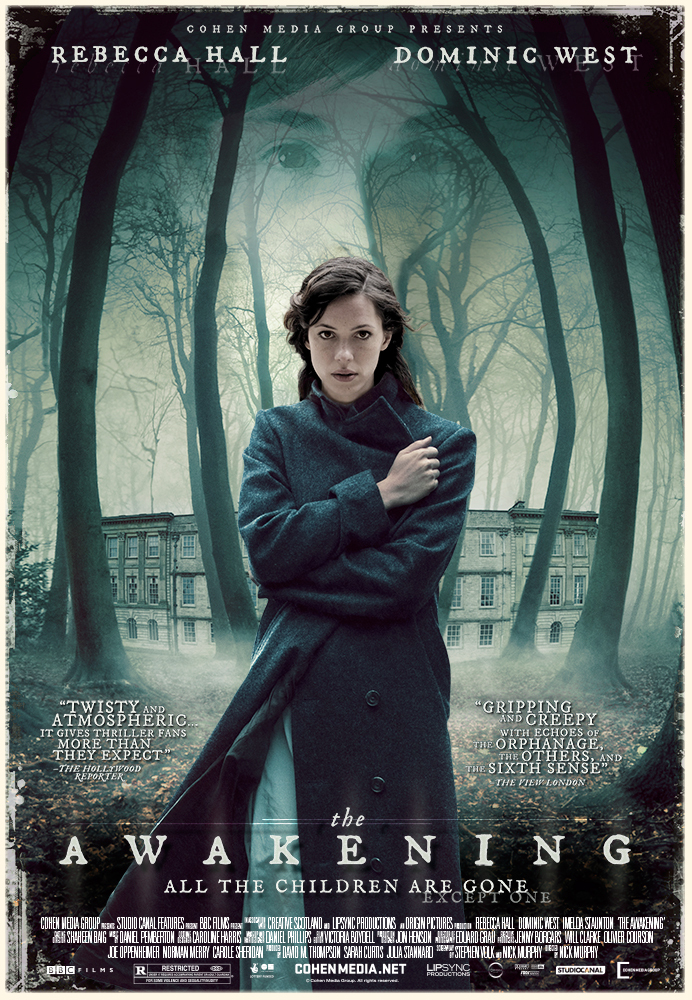 Who doesn’t like a good scare once and a while? If done right it can send shivers up your spine and have your arms covered in goose bumps; leaving you with the sensation of just getting off a great rollercoaster. First time director Nick Murphy brings us The Awakening starring Rebecca Hall (The Town, Vicky Christina Barcelona) in the lead role as Florence Cathcart, a author/myth buster to the supernatural; she debunks rumors of ghosts with research and thorough investigations. Her “talents” are requested at a boy’s boarding school and she is hired by Robert Mallory played by Dominic West (The Wire) to unravel the mystery of a young boy haunting the students.

At the start of the film there is a quote stating “Observation: Between 1914 and 1919 war and influenza have claimed more than a million lives in Britain alone. Conclusion: This is a time for ghosts” The tone of the film is very dreary, it embraces the loneliest of the characters and the environment surrounding them. Florence is guilt stricken by the death of her boyfriend who died in The Great War shortly after she declined his marriage proposal. With every rumor she exposes also comes the knowing that ghosts do not exist and that her dead boyfriend may never forgive her or be at peace. This is an interesting piece to Florence’s character because she does her job and does it extremely well; each time though she loses a piece of herself. She carries a heavy amount of guilt with her that greatly affects how she conducts her work and how she handles situations.

The film’s eerie tone picks up as soon as Florence and Robert arrive at the school, the characters introduced and the score make your senses go off that something is not right. The score by Daniel Pemberton is exceptionally well and adds depth to each scene; it grabs the viewer’s attention and brings them to edge of their seat. Equally as well was the film’s cinematography handled by Eduard Grau, the scenes where Florence is chasing the ghost and when she is alone were superbly shot and just as creepy to sit through. It was the talent and artistry from each department along with Murphy’s ability to bring it all together that made this film so enjoyable to watch.

The real reason Florence was hired was to investigate the death of a young boy, thought to be scared to death from the ghost. It takes little time for Florence to set up her gear and start questioning students. Once Florence gathers her clues and has a chance to observe everything it unravels quite quickly and the results are equivalent to the ending of a one hour crime show. Florence points her finger at the guilty culprits and they are dealt with accordingly; however her real investigation has just begun. She was hired to find the cause of the boy’s death, that she did in some form; but it is her curiosity in the ghost that keeps her going. The students are sent back home until the next semester leaving all but Florence, Robert and the school’s governess Maud Hill to tend after the building and finish the investigation before the boys return.

This is where the film really begins to build momentum. Each passing night Florence is haunted by the images of a young boy ghost playing with her like a game of hide and seek. Regardless of how many traps she leaves for the ghost she is unable to find it; she is determined to figure out this “hoax”. In this relentless search she becomes more and more frantic, unable to grasp her mind around it. Each scene slowly brings you in only to give you that uncomfortable feeling more and more until the payoff; it’s in the tension building that Murphy accomplishes so well, it keeps you wanting to learn more about what is happening. When you finally reach the climax of the film it plays out like a opera, each note feeling like an emotion pouring out.

Without giving too much away this is was an excellent first time outing for Nick Murphy and I believe this film stacks up with other fine ghosts films like The Sixth Sense, The Haunting (1963) and The Ring. What I enjoyed most from this film is the same that I enjoyed from another ghost film released by the UK earlier this year, James Watkins’ The Woman in Black starring Daniel Radcliffe. Both films took the most basic approach to its scare tactics: use of camera placement, lighting, or lack of, and its use of sound. Not everything has to jump out to scare you; these simple things when done right, is all it takes for your mind to create its own horror. Take it from me, this film made me never to want to see a doll house again.

I have but two plights with this film, the first was its use of a rape scene, where I felt the character and his reason behind it was just too off and was never touched upon to give it any real substance. The second would be the extra twists at the end, I felt it was an add-on to give something more to the film but it really just made me question what happened after. With these two pieces put aside I feel this was a fantastic film held together wonderfully by Rebecca Hall who played a very strong female lead. She was exquisite at portraying the pain and grief that Florence carried with her while at the same time being a strong, courageous, level headed woman.