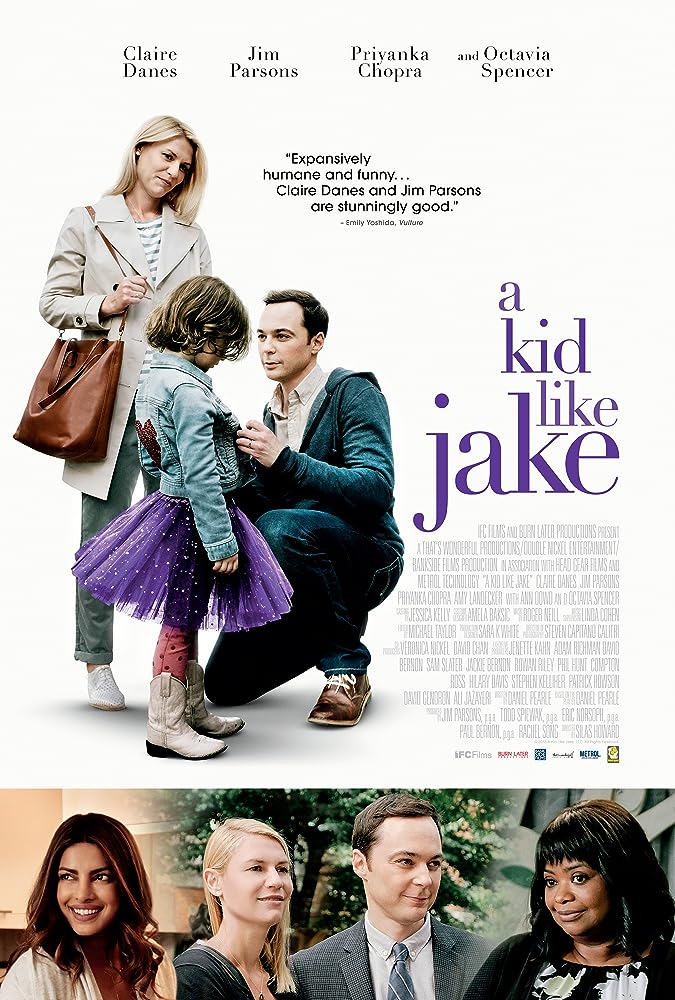 Running its course through the festival circuit at the start of the year the film A Kid Like Jake starring Clair Danes and Jim Parsons is set to release this Friday. Directed by Silas Howard it was adapted for the screen by the playwright, of the same titled play, Daniel Pearle. The film revolves around the Wheeler family: wife/mother Alex played by Danes, husband/father Greg played by Parsons and their son Jake played by newcomer Leo James Davis. Jake is just shy of his fifth birthday and his parents have begun the process of trying to get Jake into the best school with a possible scholarship. This process forces both Alex and Greg to reevaluate Jake and take an honest look at their young son and the choices he makes.

Although the title might suggest so there is actually very little screen time for Jake. Unlike recent films like Gifted or Wonder where the child is a main character Jake is limited to a background character. There are scenes to show the audience his preference for female oriented possessions such as skirts, princess toys/DVDs and wanting to be Rapunzel for Halloween. The film is not about why Jake chooses these things or how he handles it but rather how his parents come to terms that Jake is different. There are inklings that his parents knew something but they never had to face it head on and realize their child is need of help and guidance. It is the parent’s journey that is the main focus and it is not about whether Jake is gay or not but how to best help their son to have best and easiest life possible.

This film showcases a parents struggle to protect their child from the world around them while also dealing with past issues that have yet to be resolved. As mentioned the film is adapted from a play of the same title and at times that does across in the film. Although a film it feels as if watching a play especially when it reaches its boiling point between Alex and Greg. This scene between Danes and Parsons is so raw, real and emotional it not only highlights the pain these people are hiding but the strength of these actors; it is a powerful, impactful scene that both actors knock out of the park.

At the end of the film there is no clear cut resolution rather a sign of progression and personal growth. There is no one answer that can help us we roll with the punches and adapt. We make the best of our situations and try our hardest to do the best with it. Alex and Greg love Jake and that is what matters; they will do whatever it is to keep Jake happy and when the time comes he will be ready to tell them whatever it is.