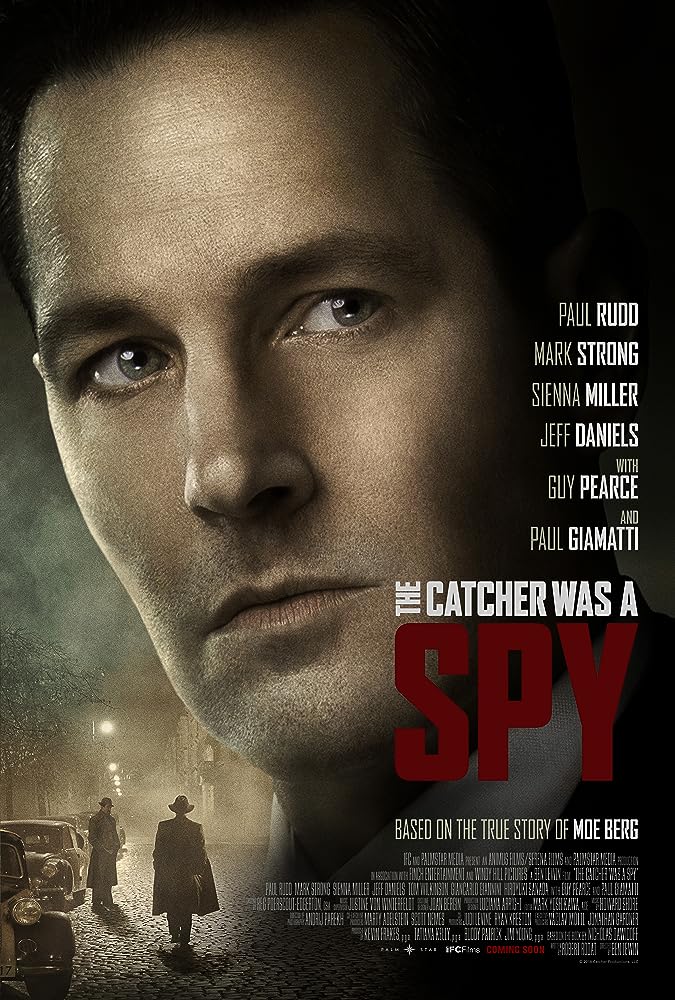 In film sometimes you never know what you will get, you walk in expecting one thing and come out seeing something completely different. This especially goes for actors/actresses who have been labeled as one thing then typecast time and time again. It is hard to break the mold when audiences are accustomed to that side of you and the most difficult label to shed is that of the comedian. Jim Carrey, Robin Williams and Adam Sandler are only a few who have tried to make that transition but it is not always an easy one to make. Audiences have to recalibrate their minds into accepting someone who has made them laugh so many times before and then to watch them again as if it is someone else on screen is oddly not an easy task.

One such actor who I believe makes this transition flawlessly is Paul Rudd (Ant-Man, Role Models, Anchorman) and a prime example would be his new film The Catcher Was a Spy directed by Ben Lewin. The film is based on the true story of major league baseball catcher Moe Berg from the 1920s/30s. Berg on top of being a major league ball player also spoke seven different languages, earned two degrees from Princeton & Columbia and appeared as a regular contestant on the radio quiz show Information, Please. Labeled by some as the strangest man they ever met Rudd plays the character with a stunning confidence and swagger.  Much like Moe himself, Rudd comes off as always holding something close to the chest as to never reveal too much about himself. If anything after watching the film you come off asking yourself who was Moe Berg really? This is all to the credit of Rudd who exudes all these qualities and also shows the actor’s versatility. Also to Rudd’s credit when approached for the role he became highly interested and invested in portraying Moe Berg. He studied extensively on Moe’s history and took linguistic classes to learn foreign languages.

The film traces Berg’s time with the Boston Red Sox, how he became a part of the OSS then sent overseas as a spy during World War II to assess the actions of German physicist Werner Heisenberg, played by Mark Strong (Kingsman). The film is not short on top talent as it also stars Jeff Daniels, Paul Giamatti, Guy Pearce and Tom Wilkinson in supporting roles. The film though regardless of the sold cast feels at times like it is trudging through the mud and at a run time of 1hr 38min should be otherwise. Aside from Rudd and Strong I felt the rest of the cast was just there, not much weight was put into their characters to grab a hold of.

While the title of the film has spy and it is portraying a MLB catcher the film does not fall into either category. It is neither a spy film nor a baseball film; it merely has elements of each and makes the film its own. If anything the film plays more as a character study of Berg who was also a closeted homosexual and seems more at times to just be “playing” the game… of life. I do not believe Berg was ever in his own element but merely just playing the role that was required of him in that time period.