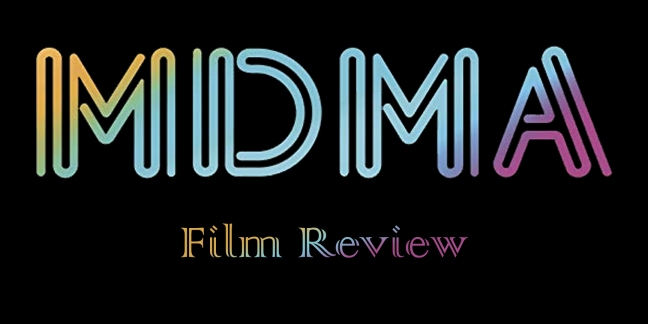 One constant that anyone can attest to is we all have messed up families. It shapes and molds us into the people we become for better or worse. In her first feature MDMA Angie Wang wrote, produced and directed. It follows her life events when attending college in the 1980s and how she made her income to support herself by making and distributing ecstasy. Immediately I have to say this movie is visually provocative; there are some captivating frames within the film and it slowly pulls you in much like the allure of Angie’s lifestyle.

The performance by Annie Q. as Angie is engaging from the start. Her personality radiates off the screen and captures the viewer’s attention that makes you want to watch every move she makes. Her swagger and pseudo-confidence is the driving force behind the film and without her I do not think the film would be the same. The negative behind having such a strong lead is that they cannot support a loose threaded story and make it a success. As strong as Annie Q. is in the role, Angie’s story feels unpolished and lacking the strength that could have made it a more powerful film. Flashbacks are used sparingly to have the viewer feel what Angie does in certain situations to give us the sense of how difficult her life was growing up. These scenes could have more substance but they are so quick and fleeting there is no time to invest and at times feel overdone.

I felt the story had a strong start but there came a moment when everything felt like a lead up but to no finish. There was too much time setting up different aspects of Angie’s life but for it all to fall apart and not given any proper sendoff felt unsatisfying. There were random friendships thrown in midway and without any real time put in everything with Tommy’s character felt rushed just to get us into an emotional tone. Some characters were given more time than others and set pieces I felt although visually stunning had no place in the film which felt wasted. The main theme I felt throughout was “my family is more messed up than yours” and the moment some type of normalcy is introduced everything goes to hell.

I look forward to seeing more work from Annie Q. and Angie Wang as both offered great glimpses of work within this film. Angie was able to make a visually pleasing and emotional film while Annie Q.’s performance stole the show.