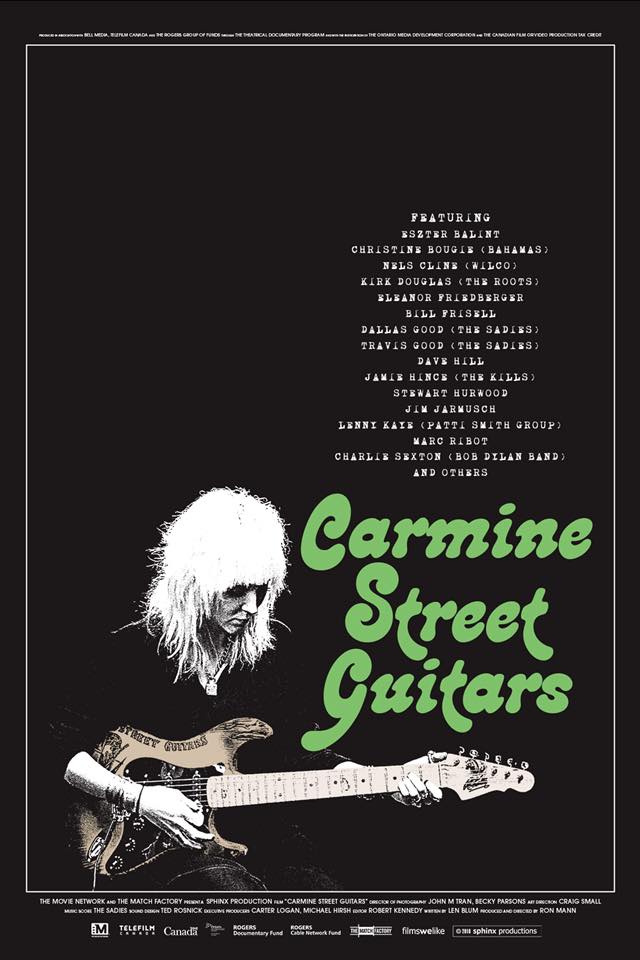 New York City is filled with close to 400 years of history. In that time the city has gone through numerous changes that leaves very little if any true history behind. If one thing is certain about NYC, it’s that it is always “under construction” and seems to be going through a constant facelift. The city is known for its beautiful skyline but it is what lies below those shiny towers that truly represents the old city. Easily comparable to the dinosaurs, old fashioned layouts and buildings that lined the streets have gone extinct to high priced realty, franchises and commercialism. It is these reasons why one can feel like Indiana Jones uncovering a relic when we stumble upon something dating back to old New York. If you want to feast your eyes on such a jewel then you should be on the lookout for Ron Mann’s documentary Carmine Street Guitars.

The film follows owner and shopkeeper Rick Kelly along with his equally talented apprentice Cindy Hulej. Kelly’s shop has been around for 29 years but before that he welcomed clientele at his prior shop on Downing Street which opened in 1976; making Kelly a staple in Greenwich Village for 43 years. In that timespan Kelly has created guitars for some of the most celebrated musicians such as David Bowie, Lou Reed, Patti Smith and Bob Dylan. What makes the work behind these guitars so special is that Kelly incorporates wood gathered from the city. In the film we see Kelly’s collection of wood gathered from different neighborhoods throughout New York dating back as far back to the early 1800s. The film presents the viewer with a week in the life of the Hulej, Kelly and his mother as they work in the small, quiet shop.

What resonated with me is how this film imitates Kelly and his personality. The film flows very smoothly day to day but much like its owner feels at peace. Kelly is a tech dinosaur: no phone, no sense of social media, no bank accounts and his mother handles the financials. Kelly takes pleasure in incorporating history into each of his instruments and as he mentions “giving the tree new life”. He does not do anything because of money or notoriety but just because for the love of it. Throughout the week the shop is greeted by a number of talented musicians, each notably enamored with Kelly’s shop and its beautiful guitars.

My only complaint with this film is that it runs too short. Running at just over an hour I could have easily kept watching as it felt like meditating. I’ve honestly never been so at ease watching a film and Kelly’s reveal of his McSorley’s Pub guitar crafted using wood from the pub dating back to 1854 is quite a joyful moment. Sadly other establishments throughout NYC have come and gone but the grit and foundations that built this city will be remembered through the soulful sounds that continue to emanate down on Carmine Street.