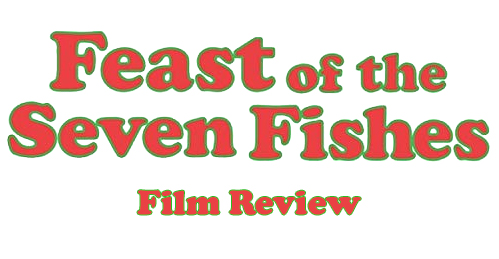 With the holidays approaching so with it does a slew of holiday themed specials and films to ring in the season. Of course with everything merry come some lumps of coal resulting in a slight disdain of these types of films. Some are cheesy, over the top and repetitive giving viewers a stale taste of these formulaic, paint by number presentations. Fortunately for those in search of some new holiday themed viewing comes the film Feast of the Seven Fishes by writer/director Robert Tinnell. Although the title seems like anything but a holiday film it is referencing an Italian Christmas Eve tradition where meat is not to be eaten.

It is 1983 in West Virginia as we follow Tony, played by Skyler Gisondo (The Righteous Gemstones, Santa Clarita Diet), as he is about to celebrate with his family and friends on Christmas Eve. The film takes place over a few days as Tony helps his family prep for the festivities but at the same time he meets Beth, played by Madison Iseman (Jumanji: Welcome to the Jungle). In the short time they are together there are instant sparks that both can sense. This leads to Tony inviting Beth to spend Christmas Eve with his family and celebrate with the Feast of the Seven Fishes. What sounds like another “typical” holiday film has an aura all its own. Surrounded by a cast of characters including Paul Ben-Victor and Joe Pantoliano the interactions between everyone feels natural. It is these interactions between Tony’s family members that comes off so genuine that makes the viewer feel like they are part of the family as well. The time this takes place is also very important as it is almost like living in an alternate world. It is hard to imagine ourselves not surrounded by technology but we forget that it was a much simpler time; it’s also with that which gives the film a certain authenticity.

I am not stating this is the next A Christmas Story or It’s a Wonderful Life but it offers that feeling of warmth, comedy and togetherness that is really the essence of the holidays and these types of films. Both Skyler and Madison offer sweet, innocent performances and with the story of also choosing what you need rather than what is deemed right is another nuance that just adds to the film.

Film will have a limited release starting Friday 11/15

Find a showing near you Here

Available for Pre-Order via iTunes Here