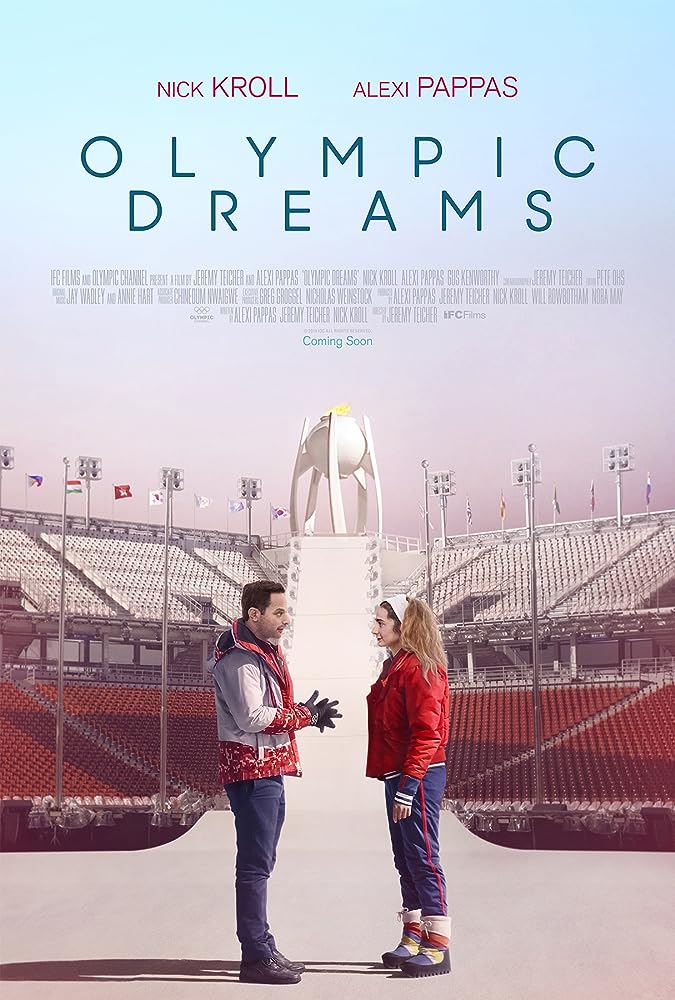 One of the perks of making films is being able to travel to places you may otherwise never have a chance to visit which also serves as an escape for the viewer. There have been films before telling the stories of Olympians and the spectacle that is the Olympic Games but for the first time ever producer/writer/director Jeremy Teicher has filmed the first feature inside athlete’s village during the 2018 Winter Games in PyeongChang, South Korea. Alongside Alexi Pappas (Tracktown) and Nick Kroll (The League, Big Mouth), who both also wrote and produced the film, the three shot Olympic Dreams by themselves.

The trio was not in lack of supporting actors though as many real life athletes participating in the games acted throughout the film. Surprisingly none came off as hokey or robotic and each were genuine in their performances; the standout being British-American freestyle skier Gus Kenworthy. The story centers on Pappas’ Penelope, a cross country skier competitor, and Kroll’s Erza who is a dentist for the duration of the games. The vibes I felt throughout this were similar to Sofia Coppola’s film Lost in Translation. The theme of isolation in a foreign land and the bond between two unlikely people is where the comparisons end though. Teicher’s film because of location and its character Penelope, Pappas was a competitor in the 2016 Olympic Games, offer a particular viewpoint therefore a completely different story to tell.

Pappas plays Penelope with an adoring awkwardness, determined yet unsure what the future holds. Being an Olympian, you may only have one shot at such an opportunity and this feeling of excitement and fear of the unknown radiates off of Pappas. Her character has been conditioned to put her where she is at this stage in life, at just 22 years old and it is not an easy bag to carry; that is until she meets Erza, a 37 year old dentist. Kroll plays the character effortlessly as an equally awkward, shy foreigner whose path in life is also at a crossroads. On a break from his fiancé Erza is also dealing with the reality that he hates his job. The relationship between the two grows naturally and never feels overplayed or forced. Both actors play off each other flawlessly and with the conditions the three dealt with during filming it is surprising how heartwarming and organic the film is.