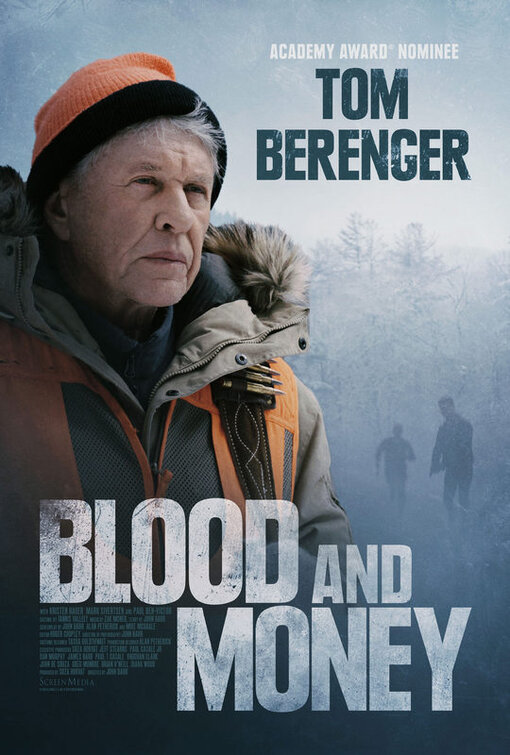 With everyone scrolling through their lists of streaming media it is comforting to know new content is still being released. In the case for those seeking more thrilling content with solid acting then I would point them towards Blood and Money starring Tom Berenger (Major League, Platoon, The Substitute). The film is from first time feature writer and director John Barr who also served as cinematographer. Berenger plays Jim Reed, an ailing Vietnam vet dealing with alcoholism living in the outskirts of Maine known as the allagash. Reed keeps to himself living in an RV, hunting with the occasional trip into town. It is on one of his routine hunting scouts that Reed accidently kills a woman. It isn’t until later he realizes evidence was left at the scene and that the woman he killed was being sought after for a casino robbery.

What plays out is a game of cat and mouse between Reed and the other members of the robbery looking for their money which Reed has taken. What could be a routine action flick plays out more as a real life scenario. Reed isn’t Rambo, he is an elderly man slowing dying, most likely from cancer, coughing up blood and slowing making his way through the tough snowy terrain. He uses the advantage of the open landscape to knock off each criminal one by one. As Reed goes through each enemy it is abundantly clear though he is not in any shape to continue going forward. Reed has past demons that he faces every day and it is this turmoil and humanity that Berenger is able to put into the character; without Berenger’s performance you do not have the same film. In every frame we can process the pain and agony both physically and mentally that Reed is experiencing.

Aside from Berenger’s performance, the actor Mark Sivertsen who played Ray also offered a strong showing in only a few minutes of screen time. The conclusion was even more satisfying because of Sivertsen’s delivery. I am a fan of Berenger’s and feel he brought this character out of the darkness to a place that emotes more compassion for Reed and the choices he made.