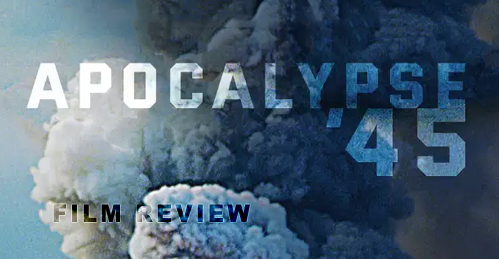 As we enter the 75th anniversary marking the end of World War II producer/director Erik Nelson gives viewers a new perspective of the events that led to the dropping of the atomic bomb. For the first time we are witness to the attacks on Pearl Harbor that occurred on December 7, 1941 through fully restored and colorized archival footage shot by those on the battle field. Apocalypse ’45 takes us through numerous battles during 1941 – 1945 each with footage and narration from veteran’s that lived through these horrific events. Hearing the stories from these veterans is a constant reminder of how awful war is and what it does to the human psyche for those that live through it.

The most haunting part is watching footage of these young men who have no idea of what is ahead of them. As some said, death was never a thought and it is that same youthful mentality that unfortunately is still instilled in young soldiers today. Watching anything in black and white always separates the viewer from they see but with this newly restored footage it is as if watching these soldiers fighting today. Watching them battle through and suffering major loses is as relevant now as it was over seven decades ago. Aside from battle footage is also newly found footage of the attacks of Pearl Harbor. The footage shows the absolute dedication and mayhem caused by the kamikaze pilots; it compares to watching a Hollywood war film.

The most interesting aspect throughout the documentary is the mentality soldiers had towards the Japanese. Hatred did not run rapid rather it was the will to fight and defend their country that drove these young men. What also shows is the emotional state of these men from fighting other soldiers to watching the aftermath of the atomic bomb. It is a much heated debate till this day as to whether we should have dropped bombs on Hiroshima and Nagasaki; yes it ended the war but it also opened the door, as we have seen, for other countries to develop such atrocities. They were called “the greatest generation” but in hindsight it was not those that carried on after 1945 but instead it was those that never returned. In times when we are struggling to come together as a nation there is hope that we can heal and feel that pride for our country once more.