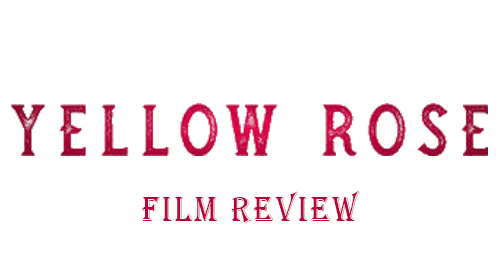 We all have our passions in life; that one desire that pushes forward amongst everything else. Now, whether we delve into that passion is another story in itself. Mostly fear prevent the majority to follow through on that one true love and that truly is a damn shame. There are many hurdles we will need to overcome in life but the ones we put in front of ourselves are the hardest to cross. This is the path Rose Garcia is faced with in the film Yellow Rose from director Diane Paragas’ in her feature directorial debut. After her mother is taken away by ICE agents young Rose is left all alone with no direction to go. The standout element is that Rose is a big country music fan as well as an aspiring musician; forced to find her own way it’s her passion for country music that is able to give her some light.

Paragas has composed quite an elegant coming of age story with a sense of innocence and purity that is often forgotten about. Characters like Rose’s crush Elliot, played by Liam Booth, the elderly bar hand Jolene, played by Libby Villari and the down & out musician Dale, played by country musician himself Dale Watson, all have a genuine charm to them that make them all extremely likeable. Through all this change though it is Eva Noblezada, who plays Rose that flourishes throughout. With no hope of a future it is through these people and her experiences that Rose is able to grow into her own person even if it is not the easiest road to go down. Like any other challenge Rose has the option to quit and leave but she knows the choices she makes now will affect her for the rest of her life. If there was one element I wish was expanded more it would have been the music. Eva is a Grammy winner as well former Tony nominee for her Broadway performances in Miss Saigon and Hadestown; with those accolades and notable country musician Dale Watson in toe I would have included more to the musical aspect of the film aside from montages and a finale performance.

Those tidbits aside Yellow Rose is a very sweet and uplifting film, all struggles aside. Even when dealing with relevant situations such as illegal immigration it played as a natural occurrence with no “message” or preachy overtone; it was just the shitty hand her family was dealt but also invokes the true fear “illegals” live in while hiding. The real story is about a young Filipina teen who is faced with the harsh reality of going back to a home she never knew or pursuing her dream of being a country musician. At its roots Paragas has delivered a wholesome story about a young girl in Texas that wants something for herself at all costs.

Film is out now & screenings can be found HERE