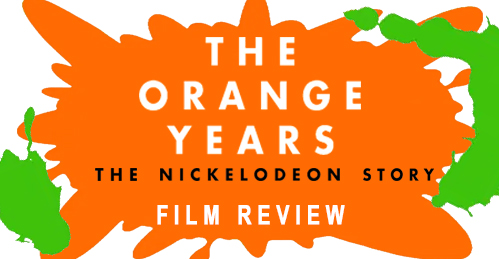 For kids growing up today it is impossible to fathom a world without cell phones or the internet. For anyone who grew up before the early 2000s though, I included, it was not even a thought. How we grow up is always evolving through the generations but I think there is one constant now: children are quick to become more adult and with the advent of social media that process is happening at an even quicker pace. I believe a certain innocence or wonderment has been lost in today’s youth and you can see that change through film and television. I believe there was no stronger portrayal of what it was to not only be a kid but also be able to get that same energy as it was when it first aired than watching some good ol’ Nickelodeon. Launched countrywide in 1979 the station was created with the sole purpose of giving an entire network to children; its evolution and impact on the youth at that time is explored in both writer/director Scott Barber and Adam Sweeney’s film The Orange Years: The Nickelodeon Story.

The film is filled with behind the scenes footage, animations and interviews from past series’ stars. It goes through the full history from the formation of the station, its revolutionary television shows and the legacy it still holds today. At its inception there were shows for children but always at the same allotted time with everything else being targeted to older audiences. Nickelodeon was aimed at children, not with the intent to make them targets to advertising but to offer them something to give them both entertainment and make them feel as equals. Finding programs to air was not easy which led to alternate avenues such as purchasing programs from different countries; one such program that made the biggest impact was You Can’t Do That On Television. Little did they know at the time that this Canadian children’s comedy sketch show would not only influence the direction of the station going forward but was also the introduction for the signature green slime.

The appeal for children was slowly growing and with the addition of the now very popular Double Dare gameshow, the network would only propel forward. With program manager Geraldine Laybourne at the helm the attitude towards children’s programming was shifting; children were not downplayed to and the subsequent shows that followed only reinforced their individuality. Shows like Salute Your Shorts, Doug, The Adventures of Pete & Pete, Clarissa Explains It All, All That, Are You Afraid of the Dark? and many others are not just staples in pop culture but were revolutionary for television. The film even shows how the station made it a point to openly discuss serious life issues such as AIDS/HIV. It also branched out to younger children with the labeled Nick Jr. which was equally as successful in providing not only entertaining television but also educational. Growing up and watching these shows had a huge impact on me as it allowed an outlet that I and many others could relate to. That is not because it was the “cool thing” to do but rather it was just the thing to do because you were a kid and it just felt like a safe place to be. The film captures the joy that went into making so many of these beloved shows that still resonate with its audience today and just like the time capsule that was sealed in Orlando, Florida it captures a moment that I do not think we will ever see again.