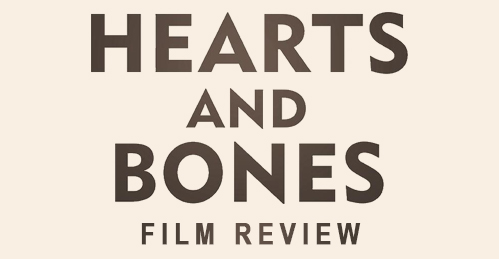 For many it is a blessing we will never have to experience firsthand the horrors of war, genocide or other such global atrocities. The closest one could come without seeing it for themselves are through the media and for as powerful as video is, I believe those moments frozen in time through photography possess a stronger attachment. It is a clear and precise moment forever captured such as Eddie Adams’ “Saigon Execution” or Nick Ut’s “Napalm Girl”, that will not only stand the test of time but also carry the history along with it. The pain is not only in the photos but also resides in those who took them; an experience all unto itself, being a third party witness to such horrors while also risking their own life. These are the themes covered in Ben Lawrence’s new film Hearts and Bonesstarring Hugo Weaving (Matrix Series, Lord of the Rings Series).

Dan Fisher (Weaving) is a wartime photographer with an upcoming exhibit about to take place showcasing his most recognized works. Fisher has been recognized as one of the most influential people in the genre and has the scars to prove it; legitimate scars too and much more as Fisher has taken decades of abuse for his craft. Before his exhibit Fisher is met by a stranger by the name of Sebastian, a simple taxi driver father of one with another child on the way. Sebastian, played by newcomer Andrew Luri, takes an immediate interest to Fisher as he was present during a massacre in his homeland and took photos. His intent is to sway Fisher in not showing any photos from these massacres but instead to take photos of his group of choir friends he meets with. The film deals heavily in confronting past ghosts both literal and figuratively as well as trying to put forth a sense of being present when looking at such photos to grasp their context. The idea of such moments needing to be seen by the public is a high road to take but is not necessarily the right one; there is so much more especially for those that lived through it and still carry the pain.

Lawrence allows the viewer to understand the views of all those involved and to pull that off is quite a feat. For all parties it is understandably easier to get a general consensus of how they each feel but to understand the inner motives that drove them to make certain decisions opens up the story so much more. Weaving is delicate yet headstrong as Fisher, a problematic saboteur of being unable to process his own pain and examine the toll it has taken. Luri is instrumental as the driving force behind the film; he carries both the sympathetic nature and complexity of such a character extremely well making it hard to believe this is his first acting role. Lawrence is able to expand on the idea of what these still moments mean: for those that experienced it and never had a voice and for those that silently carry the burden of simply knowing. Regardless of how difficult it is to contemplate such heinous acts it is moments like these that truly open our eyes to the world we live in.