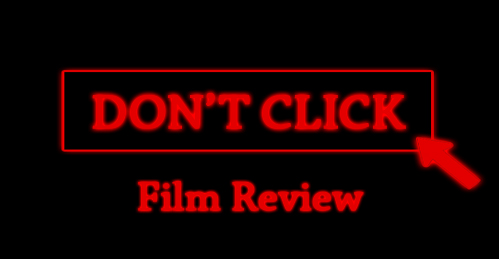 The internet is an endless labyrinth that can lead you anywhere you desire; a true maverick in today’s society. Its tunnels though can lead to places no one could have imagined and no one should ever see. In its ever expanding rolodex of digital information there are people that live out their darkest natures and even worse… let eager, equally demented voyeurs look on. In a remake of his 2017 short film director G-Hey Kim’s Don’t Click attempts to warn viewers in the dangers of allowing these sick exploitations continue. It revolves around two friends/roommates Zane, played by Mark Koufos, and Josh, played by Valter Skarsgård (Lords of Darkness).The film explores a ghostly/other worldly dimension where viewers of a video are viciously tortured slowly.

Unlike a film like Ringu or its American remake The Ring, the video in the film does not have any significant backstory or mystery needing to be solved rather it is just a brutal snuff video. The story flips from Zane and Josh being imprisoned to flashbacks revealing what led them there. Their tormentor is mute the entire time leading to an intrigue as to who he is, an answer that I believe offered the only real payoff or interest. The rest of the film is filled with cheap torture porn with odd, loosely tied together plot plots. The backstory as to why they experience this hell seems like a cheap attempt to usher a message of decency or morality but in reality just fell flat. By the end of the film it also begs the question as to whether Josh really deserved anything that happened to him especially when it is Zane that has the real issues that need to be addressed. What could have been a descent into a twisted, demented dimension of revenge and horror just felt like an Eli Roth fever dream who fell asleep watching Saw.