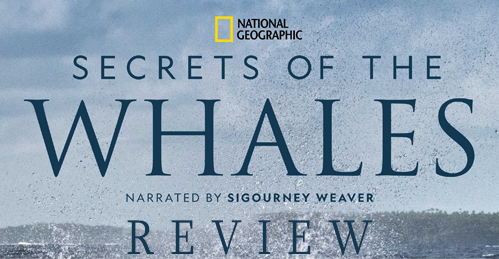 In celebration of Earth Day this year Disney+ has released a new documentary from filmmaker James Cameron (Titanic, Avatar) in conjunction with National Geographic entitled Secrets of the Whales. The 4-Part Series narrated by Sigourney Weaver (Alien, Ghostbusters) encapsulates a 3 year journey for the National Geographic team alongside world renowned photographer Brian Skerry in studying the cultural habits of different species of whales: orcas (killer), humpbacks, belugas and sperm.

The orca aka the killer whale is the deadliest predator in the ocean. In studying the orca the NatGeo team discovered the orca’s clever way of stunning its prey flipping it upside to disorientate it. The theme among all these species most certainly relies on its dependency of family or being part of a pod. There is familiarity as well within their own whale culture such as mourning the dead; where footage was recorded of a mother grieving her baby with a clan following behind. The most revealing parts were the cunning forms in which each type of whale hunts for food with the orca sneakily surfing up to the shoreline to capture seals.

In watching these different species there is a common theme of traditions passed on; their own path to survival and the necessary tactics to keep their clan thriving. The humpback shows a great dedication and history even in small numbers as only a 100 are known to act in the specific hunting method shown. A group effort indeed as it takes 3 whales to work together each performing a different task with the reward being a bundle of herring. An astonishing site that happens once a year when these massive animals perform what is essentially a synchronized swimming routine. Their communication pattern is something to be of awe as well with signals being sent across the globe in addition to specific patterns exchanged between a mother and her calf.

The smallest of its much larger cousins the beluga is smart enough to know there is safety in numbers with it traveling in larger packs. It is also considered the most social with it being able to emote expressions as well as tilt their head. I would have to say though their highlighted journey seemed the most risky with their route being carved in melted pockets of ice running the risk of not getting oxygen if the exact path was not followed. Seen consistently throughout with each of their own traditions passed on, I think though the beluga have the most luxurious; offering spa like treatment in a secluded area where they can shed layers of dead skin and most importantly give birth without worry of outside predators. They are also very aware of their surroundings in open waters where they change the pattern of both their communication and movement. One of the more amazing sites in the series was when a group of belugas adopted a lost narwhal into its pod seemingly knowing it was lost and one of their own even though they look nothing alike.

The series ends with team’s coverage of the sperm whale, although not the biggest species as that belongs to the blue whale, it does have the largest brain on the planet weighing up to twenty pounds. Such a giant animal certainly does not shy away from the unknown as it hunts deep down in the dark abyss for giant squid solely based on its sonar. Although the same animal does not necessary mean the same habits as the NatGeo team discovered when researching sperm whales in Sri Lanka; their language and habits were completely their own with a dedicated observer even stating such an event would only been seen once in 15 years in his area of Dominica in the Caribbean.

In releasing this series on Earth Day everyone involved obviously wants the message of recycling and doing our part to be a focal point but it is done very seldom. The topic of waste management and the impact it has on our environment and more so the ocean isn’t overplayed. We watch these incredible animals taking part in traditions that have been passed on through generations because it is how they survive; by watching them take part in their own rituals and culture we are able to share empathy in these creatures. It is disheartening to watch an animal suffer because of disregarded fishing line or plastic littering the ocean. There is a certain awe and majesty that comes with watching these animals practice what they’ve inherited; we owe it to ourselves and others to preserve such beauty and not let it disappear.