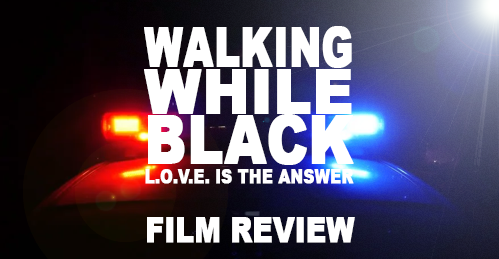 There are times it is essential for a message to reach the masses and there is no bigger topic right now than the relations between police and the African American community. The last few years have been especially important with the rise of the BLM movement with marches taking place across the country. Writer/director A.J. Ali’s film WALKING WHILE BLACK: L.O.VE. Is The Answer not only highlights the ramifications of such senseless deaths of individuals like Treyvon Martin, Eric Garner, and Philando Castile but also tries to bridge the gap in this tense relationship. The film serves as both a history lesson in the constant loss of respect in the eyes of the African American community in their police but more importantly gives insight of those in law enforcement and the steps that can be taken to heal together.

What I appreciate in Ali’s approach is he offers a resolution that is both simplistic and fundamentally accessible to all law enforcement personal. His idea is cemented in the legacy of his dead brother who passed on the belief of “L.O.V.E.”: Learn about the community and the people in it, Open your heart to the humanity of people in the community, Volunteer yourself to be part of the solution, and Empower others to do the same. This is not a difficult solution but it is one that has to be invoked through every precinct to every officer and pushed through their communities for the real effect to take place. Ali provides powerful testimony from different ranked officers throughout the country of their individual experiences in how their eyes were opened to the real issues not being discussed. Ideas such as “Defund the Police” are thought to mean harm to the police but although not discussed in the film resembles similar tactics where focus is put towards departments that would have a better outreach/connection in the community.

Film is Available Now via VOD through Vimeo